Re-reading the book 'Oxfordshire: A Pocket Guide' (by Carole Chester) there is a mention of the Abingdon tradition of Bun Throwing on page 13 in the Gazetteer section.

Interestingly the tradition is described as "The curious custom of tossing 'Rejoicing buns' from the roof on special occasions...". I've never heard of the event's buns being called 'Rejoicing buns' before. It also states the events have taken place since 1820, rather than the recorded date of the first Bun Throw in Abingdon in 1761.
Posted by Richard Gottfried at 4:55 pm No comments:

Bun Throwing Events I Have Attended in Abingdon 1981-2006

Of the 31 Recorded Bun Throwing Events held in Abingdon between 1761 and 2006 I have attended all of those held since 1981, a total of eleven.

The next Bun Throw will take place later this month, to celebrate the Royal Wedding.

Recorded Bun Throwings in Abingdon 1761-2006
Posted by Richard Gottfried at 9:14 am No comments:

I have received my five Raffle Tickets for the chance to join the dignitaries at the 32nd Abingdon Bun Throwing event to celebrate the upcoming Royal Wedding. 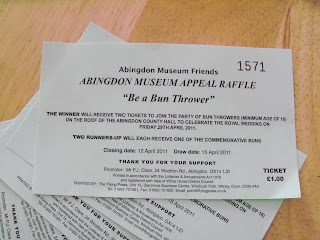 You can find out more about the Abingdon Tradition of Bun Throwing, and purchase the Raffle Tickets, at the Abingdon County Hall Museum website.
Posted by Richard Gottfried at 9:02 pm No comments: