On 15 September 2006 the town of Abingdon continued the celebration of the 450th Anniversary of the Charter of Incorporation granted by Queen Mary in 1556 by holding the second bun throwing of the year in the presence of Her Royal Highness the Princess Royal.

At 11.30am HRH Princess Anne arrived in the market place and was greeted by schoolchildren from St Nicholas School who sang their 'Bun throwing song'. HRH then entered the old County Hall and after spending some time in the hall came out into the crowd to meet the local people.

After the National Anthem was played the Mayor and other local dignitaries threw down 450 buns to the crowds waiting in the market place beneath them.

Each of the 450 currant buns were marked with the initials 'PR' standing for Princess Royal. 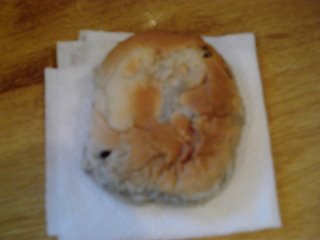 In the rush to join in the catching our group was split into two, with the pair at the front left of the market place catching one currant bun, while the group in the centre failed to catch any.
Posted by Richard Gottfried at 10:01 am No comments:

According to the Oxford Mail (12th September) 450 buns will be thrown at the Bun Throwing event this Friday (15th September).

Although this is a relatively small number of buns in comparison to previous bun throws, the number 450 is very significant as each bun will represent one of the years of the 450th Anniversary of the Granting of a Royal Charter to the town.

This also means that the chance of catching a bun will be far lower than many previous events and competition amongst Abingdonians vying for the buns in the market place will certainly be fierce.
Posted by Richard Gottfried at 10:12 am No comments:

On Friday 15th September 2006 Her Royal Highness the Princess Royal will be visiting Abingdon as part of this year's celebrations of the 450th anniversary of the town's Charter.

As part of the 1 and a half hour long visit there will be a traditional bun throwing ceremony from the Old County Hall which will mark the Charter and borough status granted to Abingdon by HRH the Princess Royal's ancestor Mary Tudor.

The Princess Royal is due to arrive in the Market Place at 11.30am.

This is the second bun throwing ceremony of 2006, the previous event taking place on Saturday 10th June.

No details of the number of buns to be thrown are currently available, however it is possible that 4,500 may be thrown, as this is a multiple of 450 and was the number thought to have been thrown on 10th June.

Due to security reasons no cameras or other electronic devices will be permitted in the town centre for the duration of the visit.
Posted by Richard Gottfried at 10:44 am No comments: 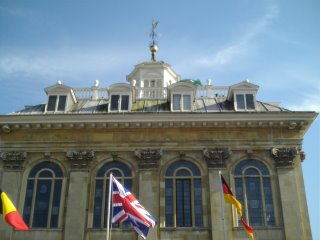 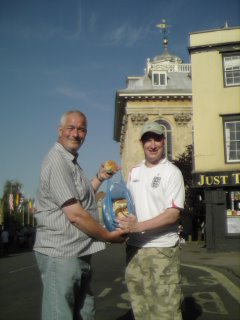 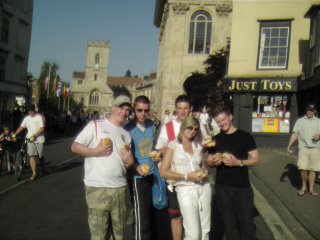 Jon, Richard, Christopher, Zoe and Rob show
off their BUNS!
Posted by Richard Gottfried at 1:03 pm No comments:

On Saturday 10th June 2006 my family and friends descended on Abingdon Market Place to be a part of the 30th Abingdon Bun Throwing.

The Bun Throwing was held to celebrate the 450th Anniversary of the Charter of Incorporation being granted to Abingdon by Queen Mary in 1556 (see notes). June 10th is also the date of Queen Elizabeth II’s Official Birthday which made the event a joint celebration.

The unique tradition began in 1760/1761 to mark the accession/coronation of King George III, and has taken place to celebrate special occasions and royal anniversaries ever since.

Our group arrived at the Market Place at 5pm and picked a prime spot in the middle of the square in a shadow of the old County Hall (now home to Abingdon Museum).

As the tension mounted until the first bun was thrown we were entertained by some traditional Morris dancing and music.

At around 5.45pm the Mayor, Freemen and other dignitaries made their way to the town hall where the National Anthem was played.

As the ‘throwers’ made their way to the top of the building the Abingdon Town Crier bellowed out a speech declaring the reasons for the event, ending with the cry of “God save the Queen”.

At 5.56pm the first bun was thrown and the event was underway!

In total 4,500 buns were thrown down to the people of Abingdon and you can see the numbers caught by our party of Abingdonians.

Our group was extremely pleased with our haul, especially so because one of the buns caught had a special ‘06’ marking!

A very good time was had by all, although after spending 20 or so minutes of looking up at the roof myself and Zoe found that we had very sore necks.

Other injuries included twisted fingers, pockets full of bun dust and squashed currants on our T-Shirts where we had taken our ‘eyes off the Bun’ and been hit in the chest!

The two members of our group who had never been to a Bun Throwing before were both pleased they attended and were thrilled by the experience. And we are all looking forward to the next Bun Throwing!

Notes:
Royal Charters
Royal Charters, granted by the sovereign on the advice of the Privy Council, have a history dating back to the 13th century. Their original purpose was to create public or private corporations (including towns and cities), and to define their privileges and purpose. Nowadays, though Charters are still occasionally granted to cities, new Charters are normally reserved for bodies that work in the public interest (such as professional institutions and charities) and which can demonstrate pre-eminence, stability and permanence in their particular field.